Diversity Myth #1: Diversity is Only About Non-Majority People 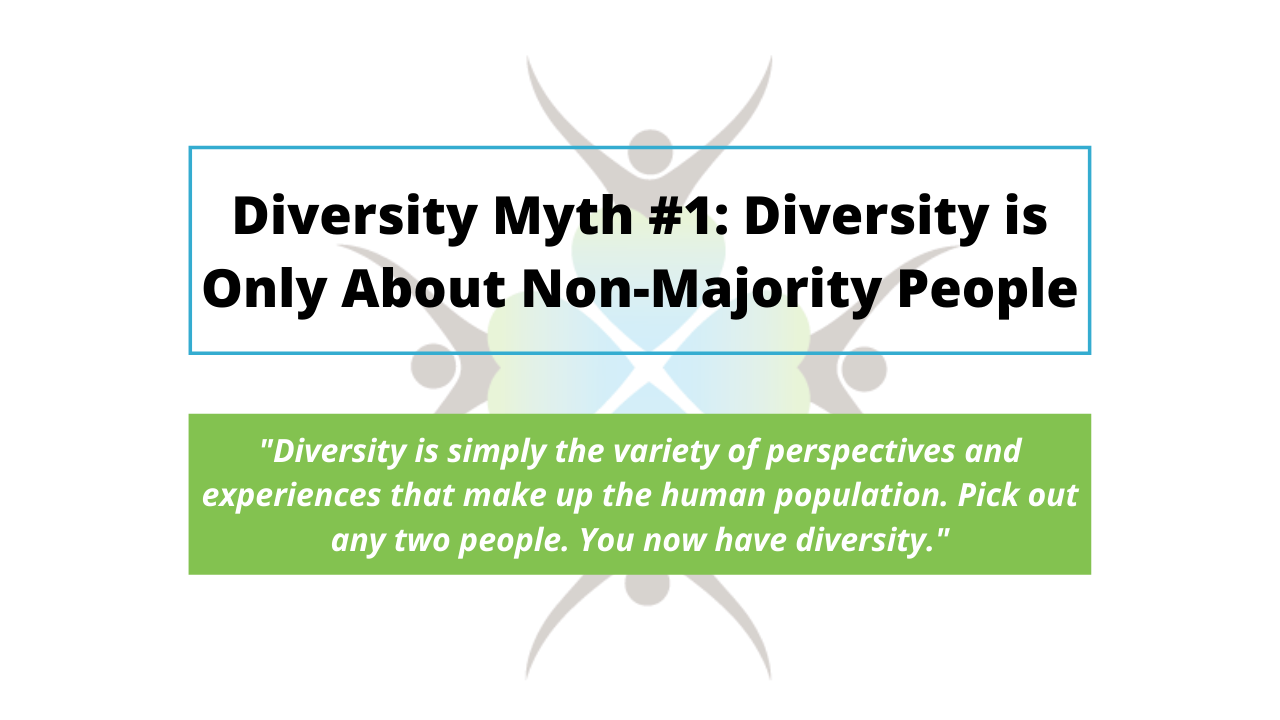 Ask any diversity practitioner if they feel understood, and the most likely answer will be that they do not. Everyone has an idea about what diversity is and what it isn't. Of course, we are all entitled to our opinions, but too often, our opinions are not facts. This is the first of a five-part series to help dispel some of the myths around diversity work.

Diversity Myth #1): Diversity is only about non-majority people.

In the States, I’ve seen signs and slogans that said that “diversity” was a code word to eliminate the White race. Of course, that's nonsense. But, there still seems to be some overwhelming idea that diversity doesn't mean White. I coach White folks all the time who think they aren't diverse. They think they don't have a culture. And part of what's perpetuating this idea is that we use “diversity” as a code word.

What do I mean by that? We're afraid to talk about differences, so instead of saying “race” or “gender” or “age” or any other diversity factor, we say, “diverse.” We say we want more diverse candidates for our jobs. We say we want diverse hires. We talk about promoting diversity. When we use the word “diversity”  in this way, we are using it as a code word to mean people who are non-majority*. “Diverse” becomes anyone who is different from the norm. And who's the norm? In the States, that means White, heterosexual, Christian, males. Anyone who is not that is considered “diverse.” This becomes problematic because it automatically excludes the White, heterosexual, Christian, males from being diverse. Now, because they are not diverse, they have no stake in promoting diversity. In fact, in some cases, “diversity” now becomes an issue for them to fight against.

Diversity fact: We are all diverse. Diversity is about everybody.

Diversity is simply the variety of perspectives and experiences that make up the human population. Pick out any two people. You now have diversity.

Diversity is simply the variety of perspectives and experiences that make up the human population. Pick out any two people. You now have diversity.

Diversity isn’t just skin deep. What we see on the outside is not what a person is on the inside. Someone may look like they belong to the majority, but there may be an abilities gap. Maybe they come from a different socioeconomic background. Maybe the color of their skin doesn't fit the stereotypes we might have about a particular ethnicity.

So, why do we have diversity and inclusion efforts in companies? Because there are groups that have been historically and systematically discriminated against, and we want to make sure that doesn't happen in the future. Certainly, we don’t want to blindly put someone into a job just because they fit in a box. Companies doing that are doing it wrong. The point is to make sure that the best person is in a job regardless of gender, race, or any of those other differences that have historically been discriminated against.

Only then can we get specific with our solutions and have the best talent in place to run our organizations.

* ”Majority” looks different depending on where we are in the world. From my perspective in the US, “majority” is White, heterosexual, Christian, and male. If you're reading this somewhere else in the world, insert whomever your majority is here. Also, remember that the majority isn’t necessarily the group with the numbers… it’s the group with the power (i.e., the group that gets to write the rules of society). So, while one group may have larger numbers, another group may have the power.