Bias and Beliefs About Equity 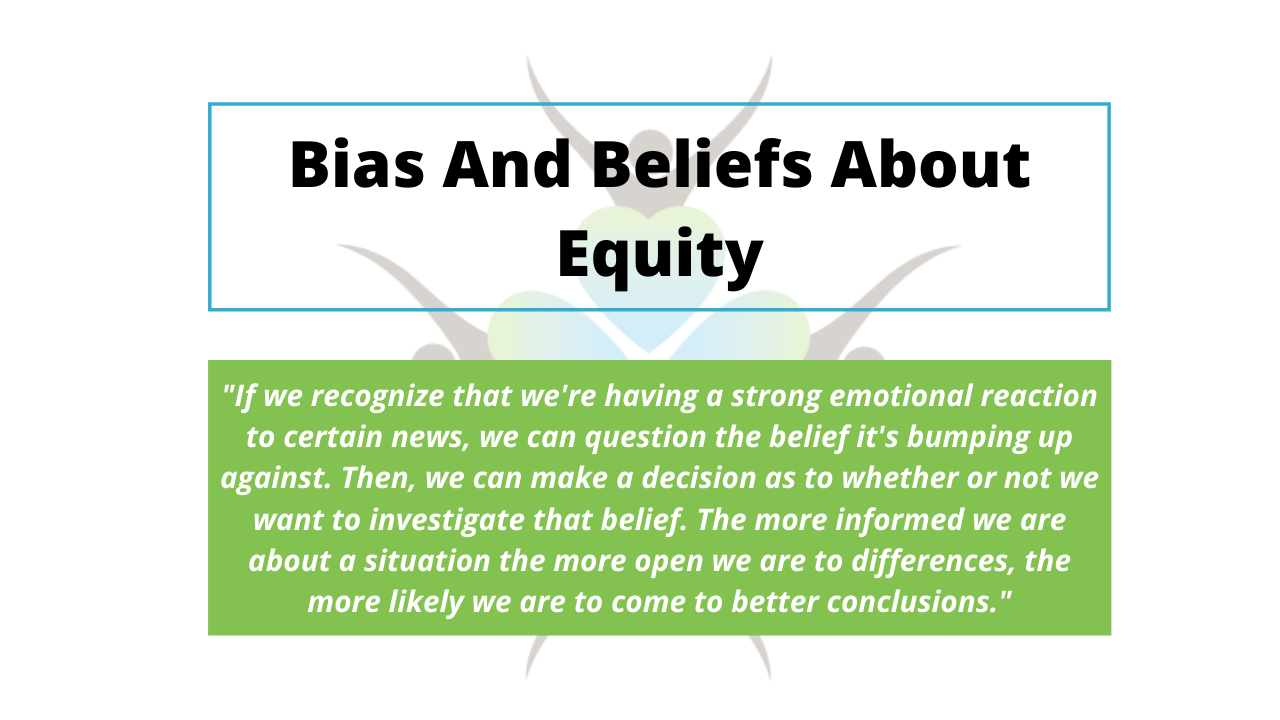 In a previous blog, I suggested that we not be colorblind, but instead, admit that we see color. Colorblindness brings with it a myriad of assumptions:

- that other people have the same wants, needs, and desires as me;

- that other people have an experience of the world that is similar to mine.

The thing is, that’s just not the case.

When we think that people may actually be treated differently because of who they are, we get upset. It doesn’t tie in with our sense of justice and equality. But, study after study shows that it happens over and over again. People react differently to others based on what they see – the color of their skin, their gender, their age, how tall or beautiful they are. As humans, we tend to act more positively to those people who are familiar to us and more negatively to those who are different from us.

When we get so upset at the suggestion that people are treated differently because of who they are, then we have to look at our beliefs, because our emotions are tied to our beliefs. What triggered the anger?

1) I treat everyone the way I would want to be treated.

There's really good intent here. Really good. But I would ask you, do you think everyone wants to be treated the way you want to be treated? If you have children, do you treat all of your children the same way, regardless of their particular needs or interests? I would hope not. There are certainly some similarities in the way you care for and nurture them, but it's just as important to recognize the individual child.

2) People in authority are to be trusted to do the right thing.

I hate to be the bearer of bad news, but not everyone sees it this way. There are plenty of studies that show there is very different treatment that exists for Whites and People of Color within the legal system and other institutions. I’ll just link you to this great article, rather than expound on it here.

Or, feel free to check out this Pew study on how views of race and inequality differ between Black and White Americans.

3) Everyone has a shot to succeed, as long as they work hard enough.

Again, the odds are stacked against some more than others. One study found that Black men had to have more education than White men to get the same job. Another study found that job applicants with “White sounding” names were more likely to get job callbacks than those with “Black sounding” names. Wage gaps persist by gender and race. There are probably 100 more studies I could find that point to the fact that not everyone has the same opportunity for success, but I'll leave that as homework for you.

I think, too often, people feel that there’s someone who needs to be blamed for the inequities. Others feel guilt. Still, others are afraid that if they admit there’s bias in the system, the scales will somehow suddenly shift the other way, and they will lose the power and privilege that’s benefited them for so long.

The truth is, none of this should or will happen. The only blame to be placed and guilt to be felt is if we don’t open our eyes and become part of the solution. The scales of inequity won’t tip overnight, if ever. In fact, it’s a bit hypocritical to spout off about beliefs in equality, and yet be afraid to lose your privileges.

The great news is that humans are conscious beings. Not only can we think and act, we can observe our thoughts and actions.

If we recognize that we're having a strong emotional reaction to certain news, we can question the belief it's bumping up against. Then, we can make a decision as to whether or not we want to investigate that belief. The more informed we are about a situation the more open we are to differences, the more likely we are to come to better conclusions.

I really encourage everyone to start investigating, start talking, and start exposing yourself to differences.

p.s. – If you’re having an emotional reaction reading this, I invite you to figure out what belief got stepped on as you were reading it? ;)